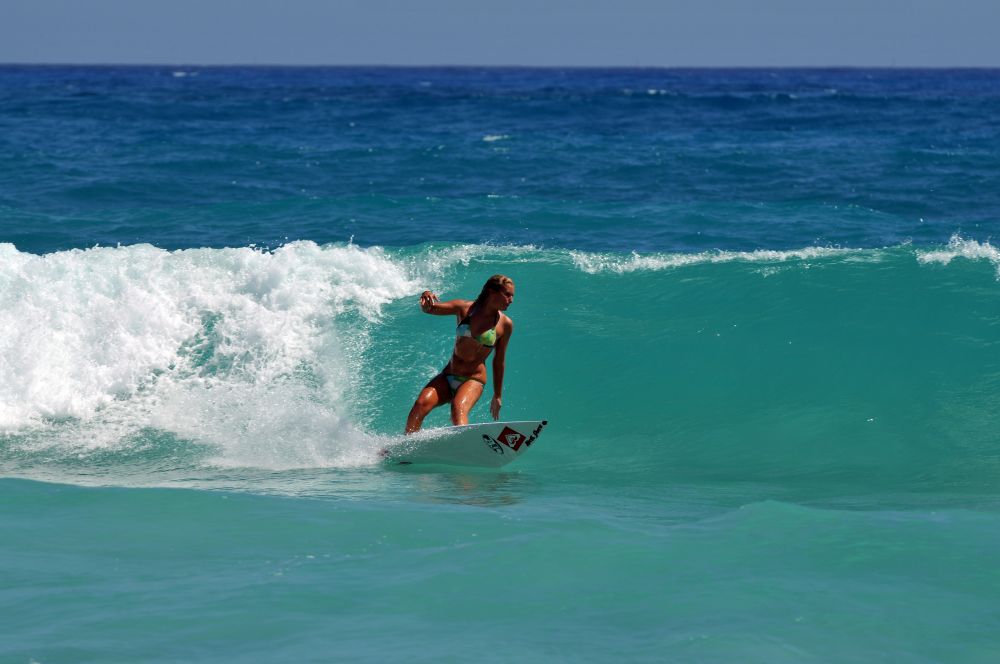 One of the best kept secrets of Fuerteventura is that it actually is one of the best surfing destinations for the European summer! A lot of people keep asking, if it possible to surf during the summer months in Fuerteventura? The short answer- YES, it is! Keep reading and we will explain you why.

Summertime means trade winds, that’s an extremely consistent wind pattern, which provides fun waves for the east coast of Fuerteventura, ranging from waist high to up to double overhead, that is plenty of size for beginners and intermediates! The fetch for the trade winds is large enough to create groundswells with 8 + seconds period, so we are talking about proper sufferable waves. There is even more swells running here in the summertime, keep reading to find out more!

Swell window means from which directions you can receive swells. In France for example, you only will receive swells from west or northwest, because the coast is only facing in this direction. Fuerteventura is surrounded by the Atlantic Ocean, so we receive swells from 360º, that means from north, northeast, east, anything from west (say Hurricane swells from the Caribbean where it is Hurricane season in the summertime) or southwest and during the summer even from the south from low pressure systems in the southern hemisphere (remember it is winter there in our summer time, so expect some long distance south swells entering at our easterly beaches).

Less wind than you think

The special thing about the north of Fuerteventura is that the nearby (15km north of us) mountain ranges of the Atalaya de Femes in Lanzarote with over 600 meters height, block plenty of the trade wind. Prevailing direction for the trade winds is north-northeast, meaning the bubble of shelter will move between the north shore and the east coast, so in plenty occasions can score fun waves at the north shore as well.

Add the fact that the trade winds are generally light in the mornings and drop of in the evenings, chances are good that you can score clean fun waves with light or even no wind. Thermal effects make the wind change direction in the afternoons, turning side offshore at the east coast – who does not love some clean, groomed, waves?

Most European mainland has a continental shelve which is fairly shallow which means swells get slowed down and waves will have less power. The Canary Islands are volcanic islands surrounded by deep ocean, no continental shelves to slow down the waves, actually our island is like a giant mountain with most of the mountain being under the surface, the water depth drops almost vertical down to over 3000 meters just a few km off the shore! For example, the water off Playa del Moro at 300 meters distance from the shore is 500 meters deep, means the waves have enough punch for you to do some serious surfing!

Most Surf camps on the European mainland are stuck at one beach, so are you if you go there. Means if the waves (and sandbars are good) you will have a great time, if the swell is too big, it’s too onshore or the sandbars suck, chances for good surf are minimum and your surf trip can be pretty poor in terms of surfing.

In the north of Fuerteventura there is over 50 spots, all within 30 min by car, so we can choose between beach breaks, reef breaks, wind directions and even the size of the waves! With our Land Rover Defenders and vans we take you to the best spots of the day, that’s what makes a 5 star surf trip!

Needless to say, the water is warm in the summer and so is the weather, a shorty or even board shorts will do it! Temperatures drop in the nights which means you can sleep well after a great day of surfing!

Only few know about how good and consistent of a surfing destination Fuerteventura is in the summertime, most people will head to the European mainland, so spots are not crowded here, means more waves and less stress for you! Still enough people here to do some partying at night if you have some energy left!

Fun things to do outside of surfing

Take a day off of surfing and go diving, whale watching, hiking volcanos, stargazing and so much more, the possibilities on this island are endless + cheap beer and food is also a great bonus!